This is a locality which over the years has not had the coverage it deserves in relation to the superb pieces of agate and other forms of gemstones that can be found around the hills. The Cheviots straddle the border between Scotland and England, and agates can be found in the many streams and small rivers, although large specimens are better found in the surrounding hills. All types of agate, including fortification, jasper and moss, can be found, with vein and moss providing the larger and often more interesting specimens.

Minerals from this locality have been collected by many people over the last twenty years, with two collectors deserving a special mention for their work in finding stunning pieces of not just agate, but also different Scottish minerals. Colin Campbell and Jeremy Triscott have amassed a large collection of these minerals, and I have included some of their findings in the pictures below.

This is a large block of brown and grey vein agate running through a matrix of andesite lava.

This is a thick slab of deep red and blue conglomerate. 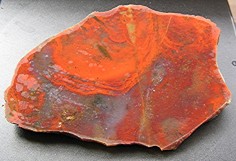 This is a block of plume agate with colours ranging through green, red, orange and yellow.